Unlike colorless diamonds and their GIA certificates, it is ideal to view a video of a colored diamond before you choose so you can see how it looks while it moves because colors and their saturation can vary so greatly. colored diamonds tend to rely on a more intuitive response, rather than a technical diamond grading report.

While round diamonds are a classic and traditional choice for engagement rings , this shape does not lend itself best to colored diamonds as they don't display the color tones as well as a radiant or cushion cut diamond, for example. While colored diamonds carry a price premium, a great way to feature them in your design is to use them on the band or in the halo.

To get a better understanding of how fancy color diamonds acquire their color, a bit of scientific discussion is in order. Firstly, natural color in natural fancy color diamonds is formed when trace amounts of other elements combine with the standard quantity of carbon during the crystallization process. Mutations in the basic crystalline structure of the diamond also contribute to the formation of natural color. If any secondary elements fuse with the carbon as it crystallizes, the color in the resulting composition can change. Other factors that can affect the natural color of a fancy color diamond are radiation and additional pressure applied to the crystalline structure.

Diamonds exist in practically all colors of the rainbow:

Purple - The most expensive of all purple diamonds are those that are uniformly pure purple without any secondary color modifiers. Known to represent creativity, femininity, love and romance.

Red - Natural red diamonds are indeed so hard to come by that up to a mere thirty are known to exist. Symbolising passion and intense love, red diamonds are thought to inspire a magic that lasts a lifetime. As well as bringing good luck, red is known to channel power, energy and self-awareness.

Orange - Fancy orange diamonds are commonly found with modifying colors of brown and yellow and such diamonds are typically less expensive. Believed to inspired boldness, creativity, and productivity, orange diamonds are exotic and evocative. Orange is an emotional stimulant and is often linked to energy, self-respect and success within relationships.

Green - Natural green diamonds owe their color to radiation exposure that unfolded over millions of years during their formation. Believed to embody the essence of life, green diamonds promote youth, vitality and balance. Green is also the color of faith and truth and is often associated with loving and healthy relationships.

Blue - Most years, only one natural blue diamond rough is mined, emphasizing how truly rare they are. Often associated with elegance and sophistication, blue diamonds promote calmness and serenity, truth and purpose.

Champagne (Brown) - Although a champagne diamond may look luxurious, its price is often quite affordable since the color is more abundant in nature. Often connected with the earth and nature, brown diamonds represent harmony and tradition. Brown diamonds fit in with all aspects of life and express subtle elegance, whilst signalling harmony within a relationship.

Gray - fancy gray diamonds are generally considered to rank among the most affordable color diamonds.

Chameleon - Chameleon diamonds got their name because they are the only diamond that can change color (often from green to yellow.)

Among these main colors of diamonds, secondary color modifiers, and occasionally secondary base colors are often present to transform the overall hue, resulting in the creation of a unique colored diamond hybrid.

As mentioned, natural fancy colored diamonds are an entirely separate group that exists and is graded independently of colorless diamonds. The colorless (often called "white") diamonds are graded on a D-Z scale. This is because even colorless diamonds can have slight hints of color in the form of yellow or brown. However, colorless diamonds are prized for their lack of color, so these hints of yellow or brown negatively affect a diamond's value. The exact opposite is true for colored diamonds, where the color is the most important factor of value. All diamond colors, including a yellow or brown color diamond with color that is stronger than the D-Z scale, will be graded based on intensity of color. Intensity refers to the combination of tone and saturation. Tone is how much lightness or darkness exists in the diamond and saturation refers to the depth of color.

•  A diamond with a light tone and light saturation is either Light or Fancy Light.

•  A diamond with a medium tone and deep saturation is Fancy Intense.

•  A diamond with a dark tone and deep saturation is Fancy Dark.

The most desired intensities are usually Fancy Vivid and Fancy Intense, the perfect marriage of tone and saturation.

We mentioned earlier that diamonds can have one or two base colors as well as color modifiers. The first color in a description is the modifier and the last is a base color. This means that a colored diamond can have:

Because of this amazing phenomenon, virtually all colors of diamonds exist to suit our uniquely individual tastes. 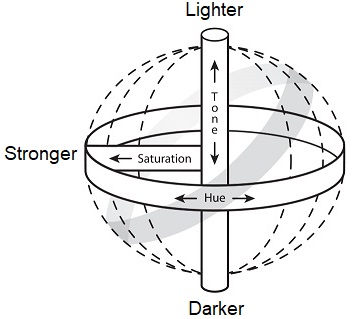 Hue is the dominant color of the diamond. It can be affected by the presence of 'modifiers' or 'tints', which are additional hues within a stone. A diamond can be a single color, such as pink, or it can have a secondary color, for example if a pink diamond had a purple tint, it would be described as a 'Purplish Pink diamond'.

A single color can potentially have multiple modifiers which are listed ahead of the primary color in the color description.

The color wheel illustrates each of the 27 hues used in the GIA standard to describe fancy colored diamonds.

The diamonds shown below as examples for each hue all have strong saturation levels. colors reach their strongest saturation at different tones, as you can see, the yellow diamond is lighter than the blue. 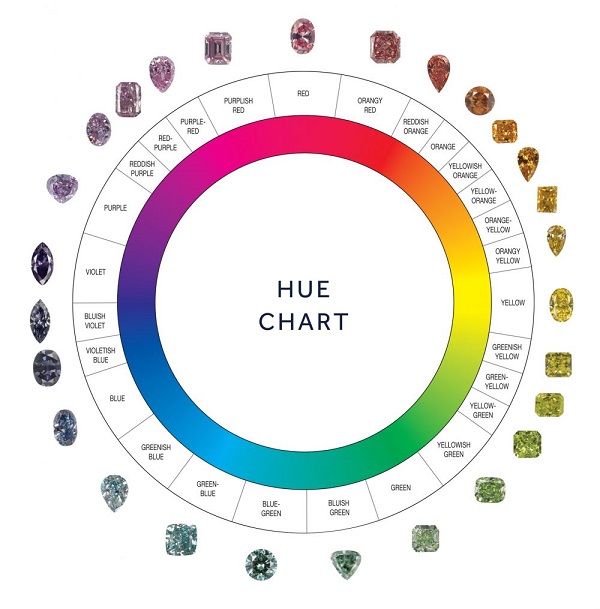 Saturation refers to the strength or intensity of the hue of main color exhibited from the diamond. Saturation of diamonds with a lighter tone can range from 'light' to 'intense' to 'vivid'. For darker diamonds, descriptions can range from 'deep' to 'dark'.

The GIA system for color-grading fancy color diamonds is designed to accommodate the fact that not all colored diamonds have the same depth of color. For example, yellow diamonds occur in a wide range of saturations, while blue diamonds do not. 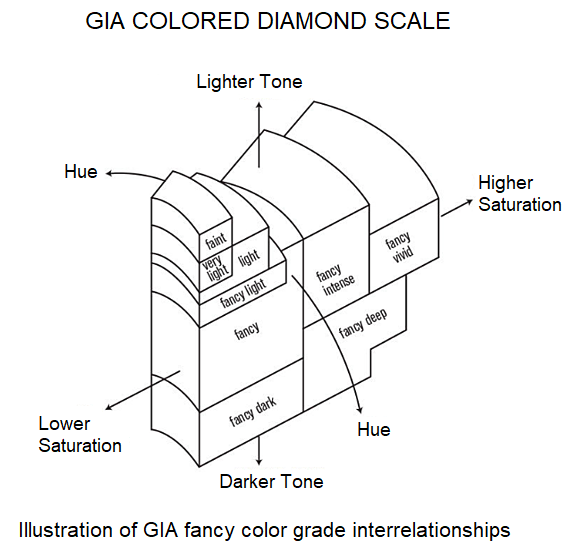 A good way to understand this is imagining a glass of red food coloring next to a glass with 2/3 water and 1/3 food coloring. The hue itself (red) has not changed, but the saturation would be more diluted, and lighter in tone.

Tone refers to how light or dark the diamond appears. This is typically determined by how much brown, black, grey or white is present in the stone.

Imagine the glass of food coloring. If you were to mix a little black food coloring with the red, its hue would still be red, the saturation would still remain the same, but it would be darker in tone. 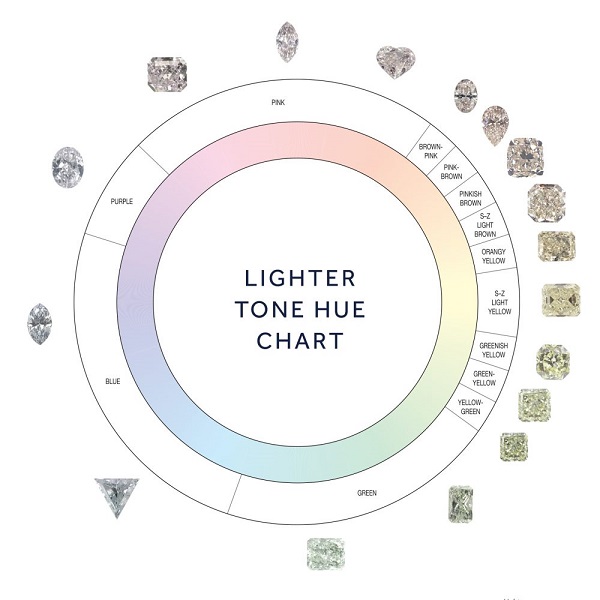 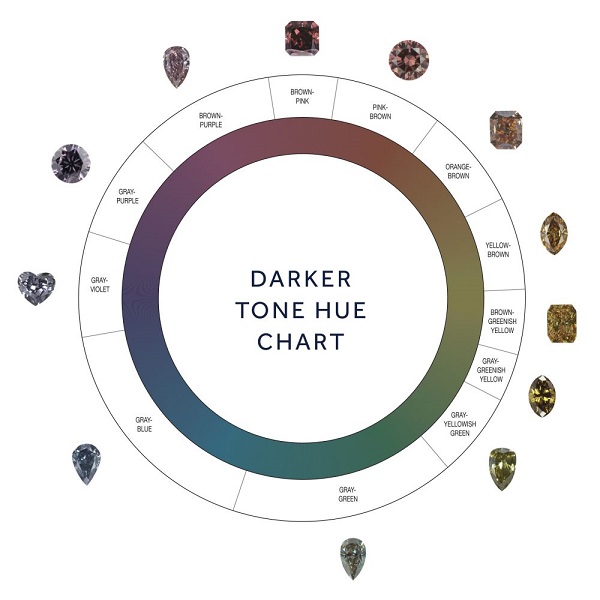 Exploring The Range Of Tone & Saturation Found Within Each Hue

Select a popular color range below to explore the range of tone and saturation found within each hue:


Yellow diamonds occur in some of the highest levels of saturation of any colored diamond. "Cooler" yellows sit toward the yellow/greenish-yellow hue boundary. 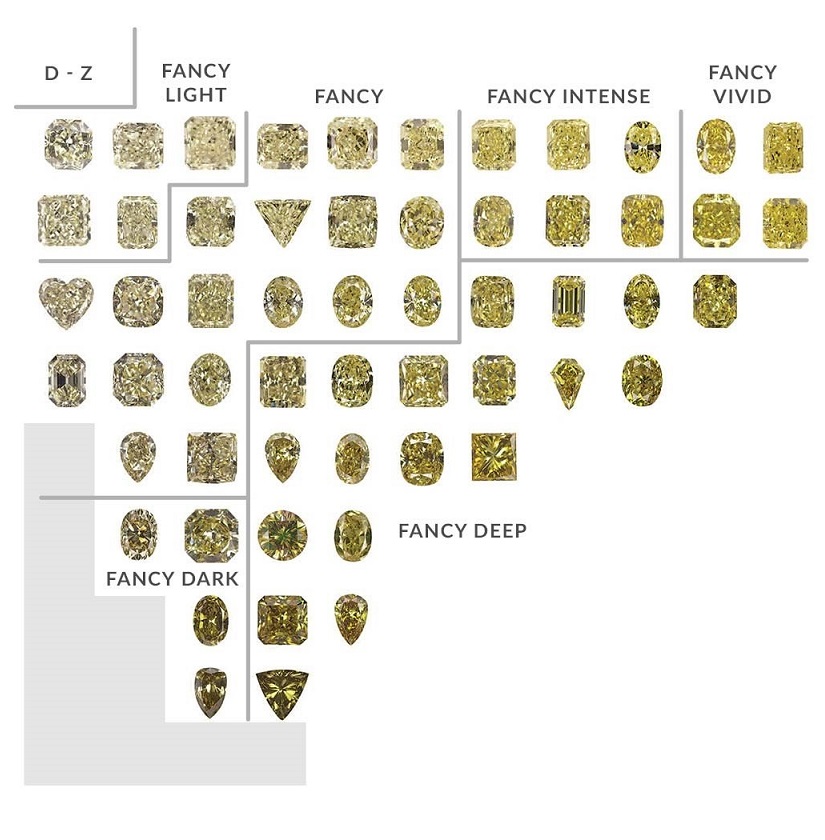 Yellow diamonds occur in some of the highest levels of saturation of any colored diamond. "Warmer" yellows toward the yellow/orangy-yellow hue boundary.

Orange-yellow diamonds occur in tones and saturations similar to those in the yellow hue.

It is in this hue range that most D-to-Z brown diamonds occur. As with yellow diamonds, there are no grades of Faint or Very Light in this hue range. However, unlike the yellow charts, diamonds described as predominantly brown are shown here.

Since the use of the term brown (or grey for cooler hues) is associated with color appearances that are weaker and or darker, the predominantly brown colors are located toward the lower left of the chart. In this hue, the term brown can be modified by yellow or yellowish. 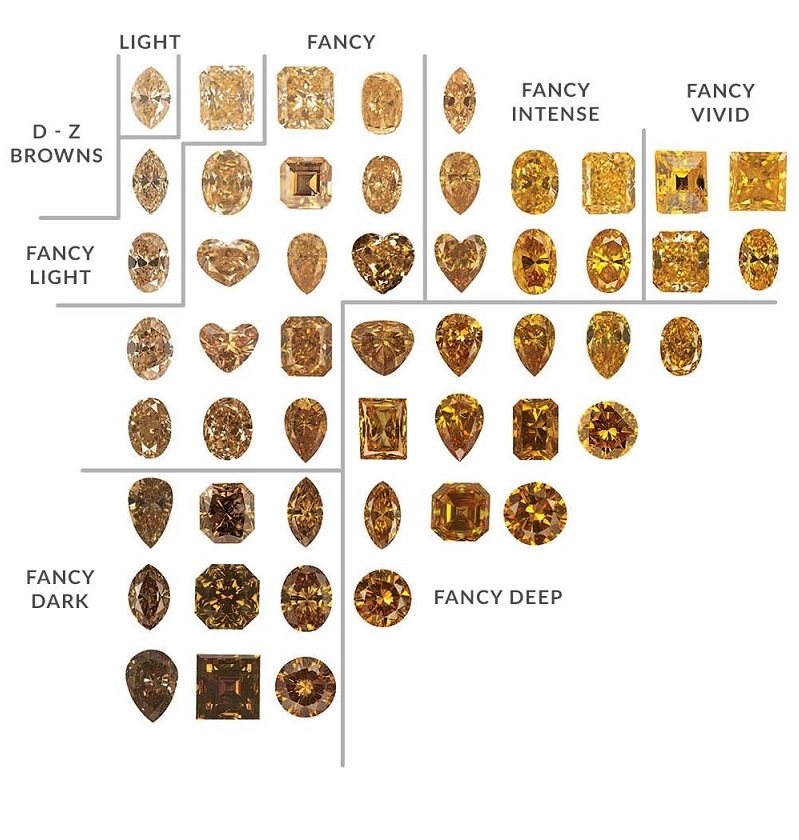 Yellow-orange diamonds occur in a wide tone range and reach their strongest saturation at a slightly darker tone than do yellow diamonds.

It's not unusual for diamonds in this hue range to be modified by brown or brownish.

Predominantly brown diamonds are shown toward the lower left on this chart and in this hue, the term brown can be modified by orange or orangy. 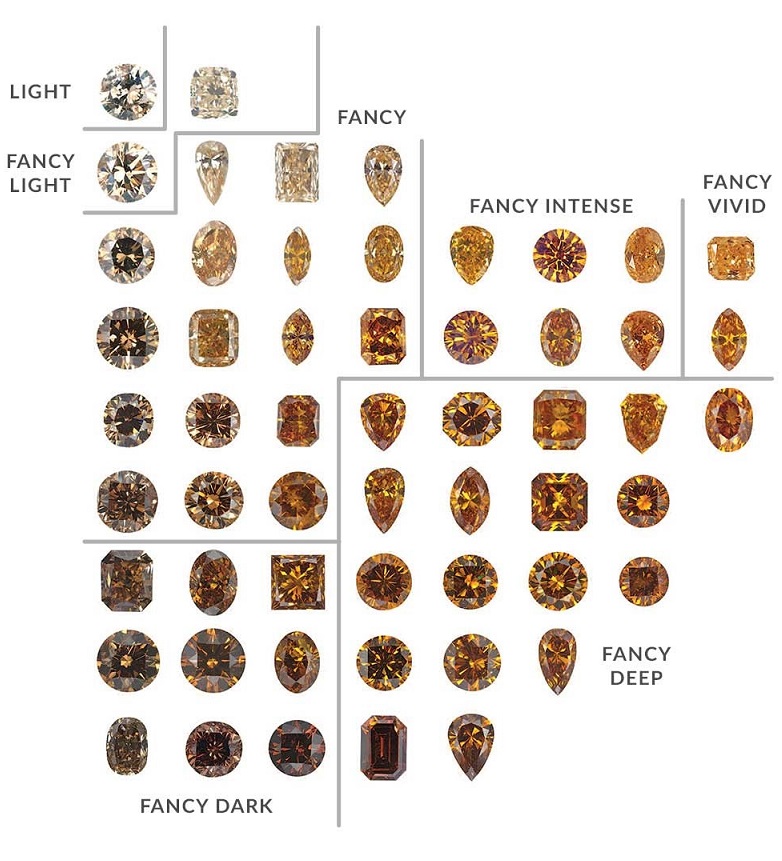 Diamonds in the orangy red hue do not typically reach as high a saturation level as those in yellow, orange-yellow, or yellow-orange. For this reason, the grades are slightly more compressed.

With the exception of the two orangy red diamonds at lower right, the diamonds represented on this chart are described as predominantly pink; that is, their descriptions do not end in the word brown. 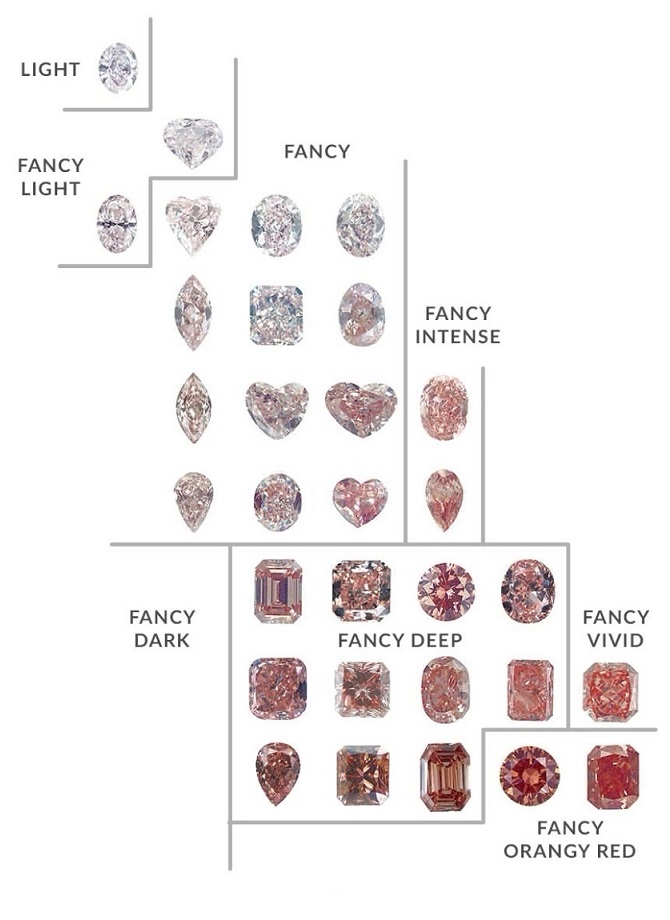 Diamonds in the red hue occur in tones and saturations similar to those in the orangy red and purplish red hues. 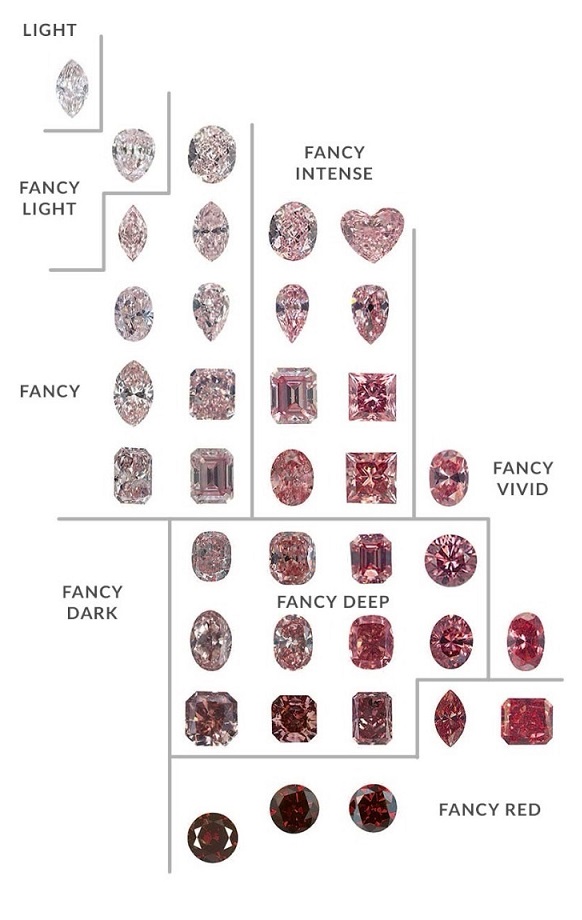 Similar to diamonds in the orangy red and red hues, diamonds in the purplish red (most commonly, purplish pink) hue occur in a wide range of tones and reach their highest saturation at darker tones.

Unlike the majority of pink diamonds in the orangy red hue, the colors here are often zoned, which makes cutting choices with regard to face-up color challenging. 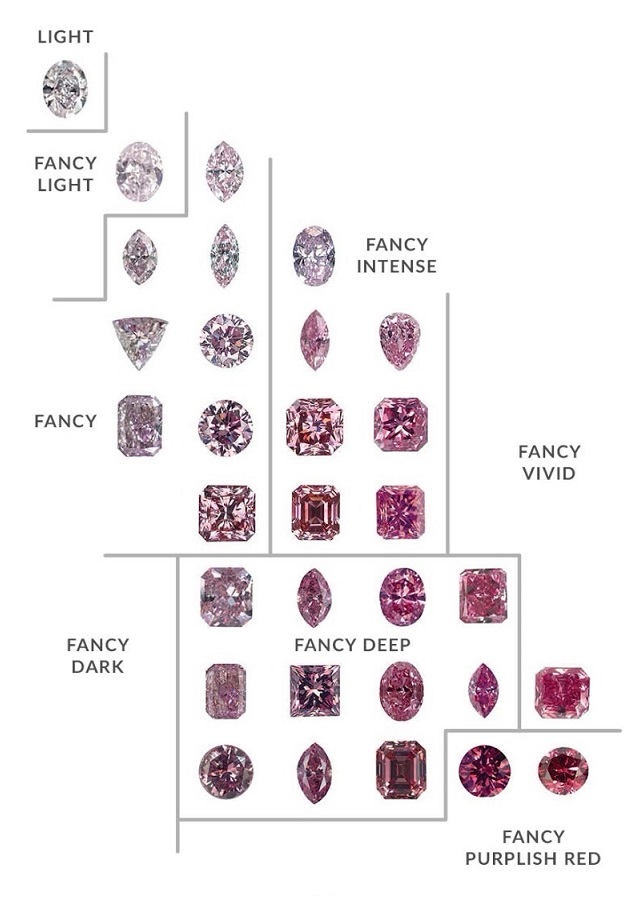 Blue diamonds occur in a relatively narrow saturation range, typically toward the neutral core of color space, but they vary widely in tone.

Blue diamonds reach their highest saturation at medium to dark tones, which are toward the lower right of the chart. The diamonds in the column on the far left represent an area of little discernible saturation where different appearances are primarily due to tone. 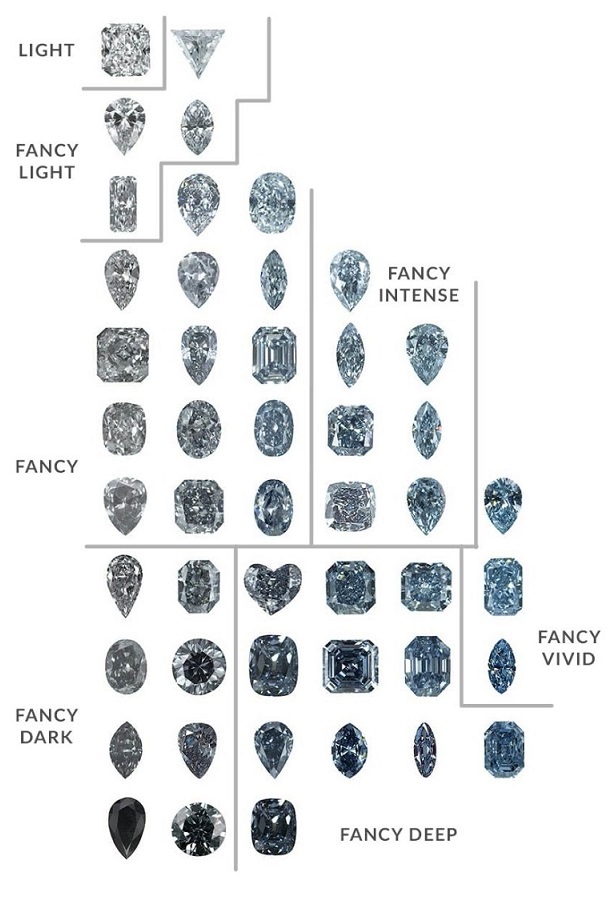 Yellow-green diamonds transition smoothly throughout their hue range. Weaker, darker colors appear predominantly grey. Such colors can be seen at the lower left on the chart. 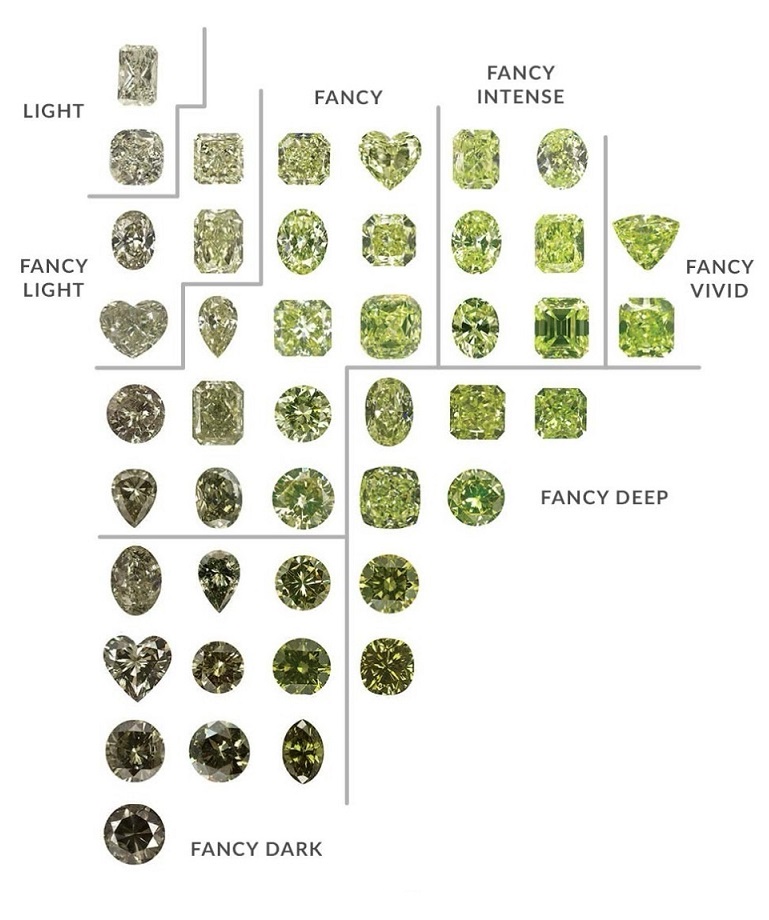 Clarity is the amount, size and type of imperfections, referred to in the diamond industry as "inclusions" that naturally exist within a diamond but cannot be easily seen, for the most part, by the naked eye. It is generally agreed that due to the microscopic nature of the inclusions, clarity does not negatively affect how a diamond looks (unless, of course, the inclusions are of the I3 variety and are accordingly so massive even the unaided human eye can see it).

Fancy color diamonds are cut and polished differently from colorless diamonds in an effort to maximize their color. On the other hand, colorless diamonds are cut in a way that will produce the most brilliance, commonly referred to as sparkle. Excessive brilliance in a fancy color diamond can occasionally take away from the focus on its color, which is not what you want in these types of stones. Although fancy color diamonds can and do have brilliance, color trumps every other characteristic and is the one quality in these types of diamonds that carries the most weight (figuratively speaking).