What Are Diamond Simulants?

Perhaps you've heard of diamond simulants, also referred to as diamond imitations, but do you know what these stones really are? Let's see what simulants are made of and how they compare to real diamonds. 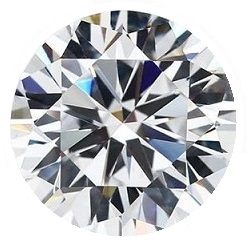 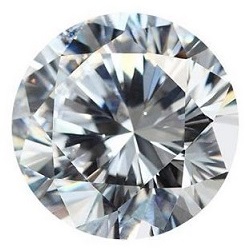 A diamond simulant is a stone that looks similar to real diamond and shares some of its characteristics. Although simulants are used as diamond imitations, they have a different chemical structure from real diamonds. Some simulants occur naturally, while others are created artificially. Examples of popular diamond simulants include cubic zirconia (CZ), moissanite and rhinestone.

A diamond simulant, also known as simulated diamond, fake diamond, faux diamond, diamond imitation, imitation diamond and diamond alternative, is a stone with gemological characteristics similar to those of a real diamond.

As the name suggests, diamond simulants are used in jewellery production to imitate real diamonds. While they look similar to the real thing, diamond imitations always have a different chemical structure and physical properties from those of a diamond. A trained gemologist with the appropriate equipment will always be able to tell a diamond simulant from a real diamond, even by visual inspection.

It is important to note that lab-grown diamonds also known as synthetic, lab-grown, lab-created, cultivated, cultured or man-made diamonds, are not diamond simulants. They have the same crystal structure and chemical composition (100% carbon) as natural/mined diamonds.

Many people confuse synthetic diamonds with diamond simulants. However, these two terms have different meanings.

Synthetic diamonds are actually real diamonds that are created in a lab. Unlike simulants, these stones have the same chemical structure as natural diamonds, and sometimes, synthetics have superior physical properties.

Moreover, synthetic diamonds have the same physical and optical properties as natural stones, meaning they have the same hardness (10 on the Mohs scale) and refractive index (2.417 - 2.419). The only difference between lab-grown and natural diamonds is that lab-grown diamonds are created synthetically in laboratories, while natural ones are mined from the earth.

People often assume that just because a diamond is referred to as man-made or lab-grown, it is actually fake. Although a lot of diamond imitations are also lab-created, whether a diamond is fake is determined by its chemical structure, not by how it is made.

The only way synthetic diamonds differ from natural diamonds is that synthetics are created artificially.

So, how can you tell if you are dealing with a diamond imitation? Here are the characteristics on which simulants differ from real diamonds:

Hardness is probably the most important characteristic that helps differentiate simulated and real diamonds. Diamond is at the top of the Mohs scale of mineral hardness with a rating of 10. It is the hardest naturally occurring mineral known, meaning it is highly scratch-resistant and has perfectly crisp and sharp facets.

Diamond simulants can never come close to real diamonds in terms of hardness. Most simulants can be easily identified by their external flaws and poor polish. Simulants scratch, crack, chip and break easier than diamonds.

Diamonds are cut to bring out their fire and brilliance. Both properties are strongly affected by the cut quality of the stone, but they are the result of the diamond's high refractive index of 2.417 - 2.419 and dispersion of 0.44.

Very few simulants have a close refractive index and dispersion, meaning they appear comparatively dull and "lifeless". Other simulants such as cubic zirconia and moissanite, exhibit a lot more colorful sparkle than diamonds, making them easily distinguishable for an experienced observer.

Compared with diamonds, many imitations exhibit a lot more colorful sparkle when lit. While this difference does not hold for all fakes, it is one of the characteristics that help to distinguish cubic zirconia and other simulants from diamond.

Most diamond imitations are usually created colorless. In fact, they are so colorless that if they were to be graded on the diamond color scale, they would receive the highest grade. Although completely colorless diamonds exist, they are extremely rare. That's why if you put most imitations next to a real diamond, most of the time, the fake will look noticeably brighter and whiter.

Diamond simulants that are created artificially usually don't have internal flaws. Natural diamonds, on the other hand, have inclusions that were embedded within their structure at the time of the formation of each stone.

Diamond fluorescence is the ability of the stone to emit visible light and change its color when subjected to ultraviolet (UV) rays from sources like the sun and fluorescent lamps. Diamonds may fluoresce a blue, yellow, green, mauve and even red of varying intensity.

Artificial diamond simulants can also fluoresce, but since they are grown in labs, they tend to have uniform properties and fluoresce identically, without showing the varying intensity of colors. In a multi-stone piece of jewellery, one would expect to see different colors and intensities of fluorescence. If all the stones emit identical light, they are unlikely to be real diamonds.

Diamond simulants are usually set in cheaper metals. For example, instead of being set in platinum, an imitation will most likely be mounted in silver. If an imitation is set in gold, the metal will most likely be plated rather than solid. While it is not necessary for a simulant to be set in a cheap metal, the biggest selling point of a fake is its low price, and for jewellery sellers it doesn't make sense to raise the price of imitation pieces by using an expensive metal.

This is usually the most obvious sign that a stone is a simulant. Real diamonds of decent size and quality usually cost thousands of dollars, whereas imitations are sold for a fraction of that.

If you see a colorless and flawless 1.00 or 2.00 carat stone with a price tag of a couple hundred dollars or less, then this is most likely a fake.

Since real diamonds and diamond simulants have different chemical structure, they conduct heat and electricity differently. Meaning, heat or electricity will pass through a diamond in another way than it would through white sapphire, for example.

These properties help to separate diamonds from their imitations using a diamond tester. To test if a diamond is real, you need to place the tip of the tester on the stone and detect the rate at which heat or electricity moves through the gem.

However, it is important to mention that diamond testers measuring only the thermal conductivity of a stone cannot tell a real diamond from moissanite as these two stones are very similar when it comes to interaction with heat. In such a case, diamond testers that measure electrical conductivity are more accurate as diamonds and moissanites conduct electricity differently.

Before you decide whether to buy a simulant, you should at least be informed about what you can expect of such jewellery.

Keep in mind that since imitations are not as hard and durable as real diamonds, over time, you will be able to see signs of wear. Your simulant will scratch, and at some point, it will become dull.

There is nothing wrong with buying diamond imitations as long as you are aware that they are not real diamonds.

The main attraction of diamond simulants is that they are a lot cheaper than the real deal, so if an imitation works for you, you don't have much to lose by buying one anyway.