What Is A Man-Made Diamond?

Man-made diamonds have been produced for industrial purposes since the 1950s and are used in a wide variety of applications: telecommunications, laser optics, healthcare and more. In 1970, researchers at General Electric created the first, small, gem quality synthetic diamonds that could be faceted as gems. By the mid-1980s, other manufacturers were able to grow them. Initially, they were mostly small and yellow, but the quality steadily improved, and today both colorless and colored gem quality man-made diamonds are available to use in jewellery. 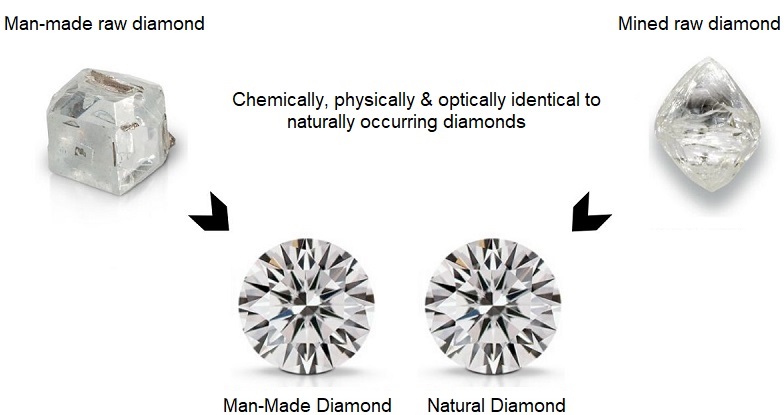 What is a man-made diamond.

While people have experimented with diamond growing technology for more than a century, it has only been in the last decade that we've been able to perfect the science of creating gem quality lab-created diamonds in a modern day lab. With today's technological advances, we are growing diamonds that are free of conflict and superior in every way to earth mined diamonds

The material 'diamond' is defined as carbon atoms in a cubic structure; both natural and synthetic diamonds are made of this material.

However, the vastly different conditions under which natural diamonds and synthetic diamonds form result in differences in their growth structure and in atomic level defects, so to say that they are identical is misleading. If they were identical, we would not be able to tell them apart.

But because they share essentially the same physical and optical characteristics of natural diamonds, man-made diamonds have the shine and sparkle of a natural diamond when fashioned as gems.

One of the beautiful aspects of a polished diamond is the way light interacts with it, and it has superior hardness on the Mohs scale (which means that polished surfaces are not easily scratched or damaged). A synthetic diamond has those properties as well.

Lab grown diamonds are now readily available in a variety of colorless ranges. They are also available in fancy colors that are considered very rare in nature, including popular hues of vivid fancy yellow. Fancy colored lab diamonds sell at comparatively reasonable prices compared to their natural colored diamond counterparts.

Natural and man-made diamonds have thermal conductivity properties that differentiate them from cubic zirconia with a handheld diamond tester. Some man-made diamonds, along with some natural colored diamonds, may be mistakenly identified as moissanites when using certain diamond testers due to similarity in their electrical conductivity. However, gemologists can typically distinguish between diamond and moissanite due to their differing refractive properties, with moissanites being double refractive and diamonds being single refractive.

Many different terms are used to describe diamonds grown artificially. Look for the use of the terms synthetic, man-made, laboratory-grown or laboratory-created. These and other terms are listed in the Federal Trade Commission (FTC) guidelines on diamonds.

The industry uses many terms to describe them, so if you see any of these terms it's an indication that it is synthetic. But they likely won't use the term synthetic.