How To Tell If A Diamond Has An Old European Cut

You probably have heard the term "old European cut," but you think you've never actually seen one? What does this cut look like, and how can you tell if a diamond has an old European cut? This guide is here to help you to learn more about this cut and walk you through its most important characteristics.

What Is An Old European Cut?

The old European cut is a diamond cut that used to be quite popular in the past, until the early twentieth century.

Around the 1920s, the modern round cut was developed, and it replaced the old European cut as the standard for round brilliants.

So, it can be said that the old European cut is the direct predecessor of the modern round cut.

Characteristics Of The Old European Cut

Diamonds with an old European cut are usually shaped so as to follow the outline of the rough diamond material and minimize waste. These stones were usually cut to maximize carat weight rather than brilliance.

Its higher crown, smaller table and larger culet gives the stone an incredible depth and presence.

The Old European cut diamond has astounding vintage appeal, you'll often find them set in heirloom designs including Edwardian, Victorian and Art-Nouveau jewellery. Vintage collectors often refer to the cut's "inner fire", which describes the distinct contrast of bright and dark flashes of light within an Old European cut, resulting in a checkerboard effect.

Below are the most distinctive characteristic of old European cut diamonds:

• Shape - The outline of these stones is round (when seen from the top), just like the shape of the modern round cut.

• Number of facets - Old European cut diamonds have 58 facets - the same number the contemporary round cut has.

• Culet - Rather than having a pointed end at the bottom, old European cut diamonds have an open culet. This means that their bottom ends in a flat facet instead of a sharp point. (This bottom facet is actually what is called a "culet.")

• Faceting and cutting - A distinctive characteristic of old European cut diamonds is that they are cut by hand. As a result, a closer look at such a stone will reveal that its facets are not shaped with such precision as those of modern-cut diamonds, which are formed using more sophisticated tools.

• Symmetry - In general, old European cut diamonds are not very symmetrical. For example, their facets may be irregularly shaped and not well aligned with each other. The reason for this, as already pointed out, is that the cutting technology used to shape old European cut stones was not as well developed as it is today.

Old European Cut Vs. Modern Round Cut: How To Tell The Difference 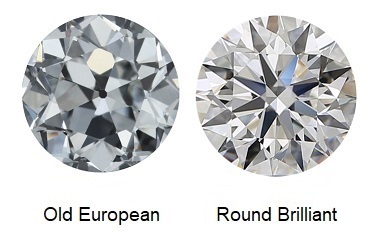 Old European Vs. Round Brilliant Cut.

At their heart, old European cut diamonds are more subtle stones. They are cut by hand, which gives them an artisanal charm and history, that draws attention to their glowing centre. With advancements in technology, new cutting techniques revolutionised the placement, quantity and proportion of a diamond's facets. Diamond cutting began to be optimised for brilliance, and so, modern round brilliant cut arrived. The facet structure is cut in such a way that when light enters the stone, it reflects back out, giving a bright, sparkly diamond. This scintillating appearance is now synonymous with modern jewellery.

A diamond is certified by the GIA as Old European Cut when the diamond meets three out of the following four criteria:

2) The culet must be bigger or equal to slightly large.

3) The crown must be bigger or equal to 40 degrees.

4) The lower half length must be bigger or equal to 60 degrees.

Otherwise, Round Brilliant will be used as a more general term by the GIA on a diamond that experts classify as an Old European Cut.

As with most ring design elements, both of these diamond cuts exhibit unique beauty, but ultimately, the choice is yours.

The old European cut and the contemporary round cut have some common features that make them look quite similar. For example, both cuts are round and have 58 facets.

However, there are noticeable differences that can help you to distinguish between these two cuts.

Apart from having poorer symmetry, here are some other characteristics in which old European cut diamonds tend to differ from modern round stones:

• Table Size - Old European cut diamonds usually have a relatively smaller table (the stone's top facet) compared with modern round brilliants. Since this is a difference in proportions, it is most noticeable when comparing stones of similar size.

• Crown Height - The crown of a round diamond is the part above the girdle (the stone's widest part, or its edge). Old European cut diamonds tend to have a higher crown compared with contemporary round diamonds of similar carat weight.

• Pavilion Depth - If the crown of a round diamond is the part above the girdle, the pavilion is the part below it, and pavilion depth is simply the distance from the girdle all the way down to the stone's bottom.

This distance tends to be greater in old European cut diamonds, i.e., they tend to have relatively deeper pavilions than similar-sized modern round stones.

One thing to remember that all these differences are relative, and to spot them, you need to examine the proportions of the stones you are comparing, especially if they differ significantly in size.

Diamond measurements are often expressed as a percentage of the stone's girdle diameter. This is how you can calculate the relative crown height, pavilion depth, and table size of a diamond and compare them with those of other diamonds.

For example, to see if a diamond's table is relatively bigger than that of another stone, you can measure the table diameter of each diamond and divide it by the diameter of the girdle - the resulting figure is referred to as "table percentage."

If two diamonds are compared, one can have a smaller table in absolute terms, but if its table percentage is greater, then its table is relatively bigger in terms of proportions.

Old European Cut Vs. Old Mine Cut: What Is The Difference?

What is an old mine cut diamond?

Dating back to the mid 1800s through to the 1900s, the old mine cut diamond was developed in Brazil. It is considered one of the earliest forms of the brilliant cut with 58 facets.

Why should I choose an old mine cut diamond?

Often seen in jewellery from the Georgian and Victorian eras, old mine cut diamonds are similar to a modern day cushion cut.

Much like other vintage diamond cuts like the old European cut and the rose cut, old mine cut diamonds tend to hand cut with the aid of early machinery.

Each stone possesses its own individual and unique character, making this diamond cut a favourite of those longing for a one-of-a-kind jewellery piece.

From a side view, old mine cut diamonds have a square shaped girdle with gently rounded corners and a high crown.

One of the most notable differences between the two cuts is that the old mine cut has a more rectangular shape with rounded corners, while the old European cut is round.

Another difference is that the old mine cut tends to have a bigger culet, which is easily visible through the stone's top.

Finally, the table in the old mine cut tends to be a little bit larger, and because of the less precise cutting technology used, the facets of such a stone are usually more irregularly shaped than those of an old European cut diamond.

In general, it would be fair to say that an old mine cut looks less refined in comparison, but many people find that characteristic charming.