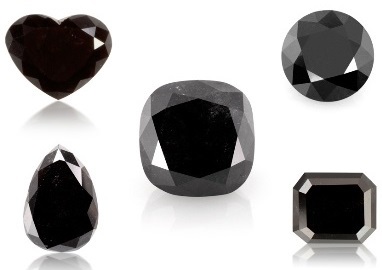 Natural fancy black diamonds, also known as Carbonado, are real polycrystalline diamonds that can be found in their rough form in alluvial deposits in the Central African Republic and Brazil. They are different from other rough diamonds in that they are more porous, making them more challenging to cut, and may have high luminescence.

Like all diamonds, they originate high pressure on carbon under the Earth's surface that produces a repeating geometric pattern in the crystal lattice. However, the black color, when it occurs naturally, it thought to be produced by the inclusion of graphite in the crystalline structure during formation, before the kimberlite deposits reached the Earth's surface. Carbonado was first used to polish wood in the Brazilian deciduous forest, and was transported to Europe after its use, although it was not set into jewellery at that time. It is also interesting to note that in 1905, black diamond was used for rock drilling in the Panama Canal.

Black diamonds have become increasingly popular in recent years due to their unique color, price and fashionable appearance. With the proliferance of black diamonds in jewellery that is preferred by celebrities and in appearances on the runway, these previously underappreciated gems are starting to be included in all types of jewellery, for both men and women!

The 4Cs (Cut, Color, Clarity and Carat) are the standards to which colorless diamonds are graded, but because natural black diamonds are opaque in nature, they cannot be graded on this same GIA scale. The GIA grades natural fancy black diamonds only for shapes and cutting style, measurements, weight, color origin, grade and distribution. These attributes are detailed in a particular type of report referred to as a "Colored Diamond Identification and Origin Report" by the GIA. Other fancy colored diamonds that are submitted to the GIA for a comprehensive grading report, including clarity, inclusion diagrams, and proportions, will be issued a "Colored Diamond Grading Report".

AAAA is the highest quality. AAAA black diamond means is jet black in color having finest luster and no nicks and scratches on its crown and table. Since there's little to no variation in saturation or tone of black diamond color, the term fancy black is used in carbonado grading. Moreover, the aforementioned term is used to distinguish whether or not the diamond is natural or lab-grown. For other diamond colors like pink for example, which can have varying opacities and hues, color is the most important grade when it comes to its value.

Natural carbonados are particularly difficult to cut and polish without chipping or breaking on the cutting wheel. This is due to the fact that they are polycrystalline, or aggregates of many individual diamond crystals. Because of this, they can take much longer to facet than colorless diamonds, and the finished gems are softer and more likely to take damage over time.

Because of the dark opaque nature of natural black diamonds, the usual characteristics of fancy color diamonds, such as color intensity, secondary color modifiers, tone, fluorescence and clarity are not applicable.

Unlike traditional color diamonds, which are translucent, fancy black diamonds naturally exist only in black and without any secondary color modifiers.

As mentioned, because of the dark opaque nature of natural black diamonds, the usual characteristics of fancy color diamonds, such as color intensity, secondary color modifiers, tone, fluorescence and clarity are not applicable.

Black diamonds are the least understood of all classes of colored diamonds. As mysterious as their physical appearance is, their origin and background are even more so. Natural black diamonds, or carbonados, bear little resemblance, chemically and physically, to other colored diamonds. The large amount of hydrogen in their chemical composition hints at otherworldly beginnings. Carbonados are the most ancient and hardest of all diamonds and are few and far between.

The Portuguese of Brazil named black diamonds "carbonado," meaning carbonized or burnt, in the mid-1700s due to its physical similarity to porous charcoal. Because of their hardness, natural black diamonds can be cut only with another black diamond. They owe their tough build to their makeup, which consists of millions of crystals cohering as a unit. Conversely, traditional diamonds are cut from one crystal that readily splits upon a common axis. Before they found their modern use as glittering mystical gems, carbonados were initially employed in polishing hardwood in Brazil. In the early 20th century, they were repurposed to drill rocks in the building of the Panama Canal.

While traditional diamonds were conceived hundreds of miles within the earth and emerged via a pair of volcanic eruptions between a billion and 100 million years ago, carbonados have been identified as being older than 3.8 billion years. This leads scientists to believe that natural black diamonds did not get the same start as their traditional counterparts. Although the bulk of diamonds practically covers the whole planet, fancy black diamonds, on the other hand, have roots only in Brazil and the Central African Republic.

For these reasons, scientists believe black diamonds hail from outer space, the result of a star's explosion, known as a supernova, which occurred ages ago. They reached earth as part of an enormous diamond-rich asteroid that fell onto our planet as stellar fragments besieged both earth and moon billions of years ago.

Black Orlov: Black Orlov is a 67.50 carat, cushion cut diamond. The Black Orlov is currently set in a diamond brooch surrounded by 108 colorless diamonds and suspended from a 124-diamond necklace.

Legend has it that the Black Orlov, also known as the "Eye of Brahma" was an uncut black stone of 195 carats, pried out of the eye of the statute of the sacred Hindu God Brahma, from a temple in Southern India. It takes much from the story surrounding the legendary Hope diamond.

Spirit of de Grisigono: The old Moghul-cut, 312.24 carat (587 carats rough), black Spirit of de Grisogono diamond is the largest black diamond in the world. It was mined in the Central African Republic but further details of the diamond are not known.

The rough stone was purchased by famous Swiss jeweller, Fawaz Gruosi and cut by the world renowned black diamond cutting specialist, de Grisogono; after who it is named. The team of Gruosi and de Grisogono have been responsible for creating the current enthusiasm for black diamond jewellery.

Planning of the cutting and the actual cutting process took over one year. The stone has been mounted on a white gold ring and set with 702 colorless diamonds totaling 36.69 carats.

Gruosi: The heart shaped, 115.34 carat (300.12 carats in the rough) black Gruosi diamond took three years to be cut and polished because of the difficulties encountered due to the inconsistency in the hardness of the rough stone. The diamond was discovered in India in 1998 and was cut by the world renowned black diamond cutting specialist, de Grisogono.

It is named after renowned Swiss jewellery and watch designer, manufacturer and dealer, Fawaz Gruosi. Gruosi is almost single-handedly responsible for bringing black diamonds to the prominence they have attained.

The Gruosi is the centerpiece of a magnificent necklace designed by Fawaz Gruosi. The necklace also consists of 58.77 carats of small black diamonds, 378 carats of small colorless diamonds, and 14.10 carats of tsavorite garnets, all set in white gold.

Table of Islam: The Table of Islam is a fancy black square emerald cut diamond weighing in at an impressive 160.18 carats. Little more is known about this diamond.

Korloff Noir: The Korloff Noir initially weighed 491 carats, and currently weighs 88 carats. It is now a round cut diamond with 57 facets, and is now located with the Korloff jewellers in France. It is reputed to bring good luck to the owner.

Black diamonds do not sparkle like other colors - however, they look magnificent when paired together or set in a solitaire setting. Since they are completely opaque, they do not vary in intensity or color at all, and can only be found as fancy black. Truly natural fancy black diamonds are very rare and expensive, therefore most of the black diamond are heated in rough and that takes the price down dramatically.