What Is An Asscher Cut Diamond? - Buying Guide 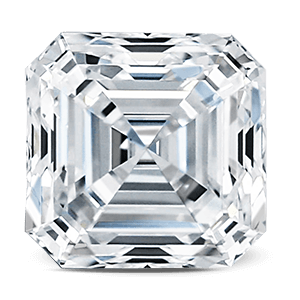 Clarity VS1/VS2 and higher is optimal 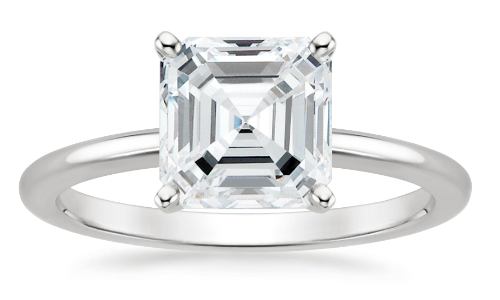 The asscher cut is a unique shape with prismatic brilliance and a rectangular faceted pavilion in the same style as the emerald cut. The standard number of main facets on an asscher cut is usually 58 and the typical ratio for the more popular square shaped Asscher cuts is 1.00 to 1.05.

The width of the cut corners may vary. Replete with timeless elegance and Art-Deco cool, the asscher cut is a rectangular shape similar to the more well known emerald cut, with prismatic brilliance, with its deep pavilion, faceted culet, high crown and small table, the asscher cut allows for tremendous lustre and creates a fascinating optical illusion known as the "Hall of Mirrors" effect.

The asscher cut is referred to as a Square Emerald cut on a laboratory certificate, such as GIA or AGS. Although confusion reigns about what the differences are between an asscher cut and a square emerald cut, they are in fact the same thing. However, there also exists a much rarer Royal Asscher cut, which is a patented version of the original Asscher cut with wide cut corners and 74 facets (instead of 58), and is classified as an octagonal step cut by the GIA.

To fully appreciate the asscher design, it is advisable to select a diamond of higher clarity ( VS2 and above for GIA and VS1 and above for EGL, to ensure it is completely eye-clean). A table and depth percentage between 60 - 73.5% and 51 - 77% respectively is also recommended.

The modern asscher cut diamond is similar to a square emerald cut, usually with larger step facets, a higher crown, and a smaller table. This combination often produces more brilliance than the emerald cut. A well cut asscher will appear to have concentric squares as you look down through the table, the result of proper positioning of the pavilion facets underneath. Like the emerald cut, the asscher cut has cropped corners; however, because an asscher is square, the cropped corners give the asscher cut a somewhat octagonal shape. Once mounted in a four prong setting, the diamond maintains its unique shape within a square silhouette.

The classic asscher cut diamond is a square (with a length to width ratio of 1.00); however they are often found in slightly rectangular shapes as well. Any ratio of 1.05 or less will appear square to the naked eye.

While the GIA provides cut grading for some cuts, such as the round brilliant it doesn't provide cut grading for Asscher cut diamonds. However, it grades polish and symmetry. These are some of the key features to be considered to have a brilliant and sparkly diamond.

The chart below serves as a general guideline for evaluating the cut of an asscher cut diamond:

Evaluating color in asscher cut diamonds is subjective. Keep in mind that many buyers may actually prefer the ever so slightly warmer colors of a G-H diamond over the cool colorlessness of a D-F diamond. In fact, most of the premium in price associated with asscher cut diamonds at the higher end of the color scale is driven by supply and demand; customers want the D-F color grades, and are willing to pay a premium to get them. In a world without diamond color grading, the price premium for higher grades would be much lower, as the actual differences in color are difficult to perceive.

Color of Asscher cut diamonds is graded on a scale from D to Z, where D signifies a completely colorless diamond and Z means an easily noticeable yellow or brown tint.

Due to open step facets and a large table, Asscher cut diamonds retain more colour than other diamond shapes, meaning its easy to see the natural colour of the diamond. This is especially true for diamonds weighing 1.50 carats and over.

To have a fairly cololess diamond, it is recommended to opt for a diamond in at least the near-colorless range: however, in many cases, it might be worth to choose a diamond in D-E-F range. The color chart below provides a general guide for evaluating color in asscher cut diamonds:

Like color, evaluating clarity in asscher cut diamonds is subjective. GIA provides excellent help with their clarity grades. Still, it is important to understand that each customer will have a unique standard for clarity. Some may be perfectly comfortable with an inclusion as long as they cannot easily see it. Others may insist on a more technically flawless appearance. Often, inclusions are easier to see in an asscher cut diamond. While an SI1-clarity might be a great balance of price and appearance in other diamond shapes, in asscher cut a VS2 might be a comparable choice.

The GIA grades clarity of Asscher cut diamonds on a scale from FL to I3, where FL means a flawless diamond and I3 indicates a heavily included diamond.

For example, while SI1 clarity might be a great balance of price and appearance for other diamond shapes, in Asscher diamonds the perfect choice will be VS2 and above. The clarity chart below provides a general guide for evaluating clarity in asscher cut diamonds:

Named after its creator Joseph Asscher, owner of the Amsterdam based diamond company of the same name, the asscher cut was developed in the early 20th century at the birth of the stylish and popular Art Deco movement. Joseph Asscher rose to fame several years later when he was commissioned by King Edward VII to cut the famous 3,106-carat Cullinan diamond for the English crown jewels. In 1980 Her Majesty Queen Juliana of Holland granted the Asscher Diamond Company a royal title in recognition of the role the Asscher family and company had held in the diamond industry.

This cut's popularity peaked in the late 1920s but remained a somewhat rare commodity for the remainder of the century, available only in antique shops and specialised Art-Deco jewellers. At the onset of the new millennium, following considerable research and development, the asscher cut was redesigned with new specifications and additional facets for a more brilliant shine, and has since regained its popularity.

Learn more about what you need to know in our ultimate buying guide, if you're thinking of buying a asscher cut diamond. We break it all down from pricing, other shapes comparison and engagement ring setting choices.