If you are able to fully adsorb the fact that some diamonds may not be an investment, but a retail product that you buy to look nice when placed on your loved one's body, then clarity enhanced diamonds are a great way to save money and get a great looking diamond.

As mentioned, many think that clarity enhanced diamonds are a cost-effective way to buy larger carat diamonds. While enhancement helps to get rid of annoying inclusions and improve diamond clarity, it is important to understand that such diamonds have pitfalls that you need to be aware of.

Clarity enhanced diamonds are natural diamonds that had eye visible imperfections (flaws, blemishes and inclusions) and undergone treatment to remove them. In other words, these are diamonds that were in included clarity range (I1,I2,I3) and have had "plastic surgery" to hide or make the inclusions less visible.

As mentioned, diamond clarity is a function of the number, size, color, and placement of inclusions in the diamond. Since theses inclusions are in essence just cavities filled with different types of materials, you can greatly enhance the clarity of the diamond by reaching those inclusions from the surface and cleaning out the cavity.

To enhance clarity further, a fascinating processes is used to actually fill the cavity with a microscopic amount of a patented compound that makes the inclusion literally disappear to the naked eye. Lets take a look at the different types and stages of clarity enhancement:

This is the only type of clarity enhancement that is sanctioned by the GIA. This involves boiling the diamond under deep pressure in a special acidic solution.

This procedure only works on diamonds whose inclusions are black and reach the surface. If the inclusion cavity does not reach the outer surface of the finished cut diamond, then the acid has no way of penetrating the inclusion.

Likewise, deep boiling does not fill in the cavity, it simply removes the black compound that's filling it. So at best this procedure can remove a very noticeable black inclusion and replace it with a slightly translucent white inclusion.

This procedure is so commonplace and cheap that most diamond manufacturers simply deep boil an entire production of diamonds before sorting to be sure they have removed any black inclusions that could be removed. There is no stigma whatsoever attached to this treatment. 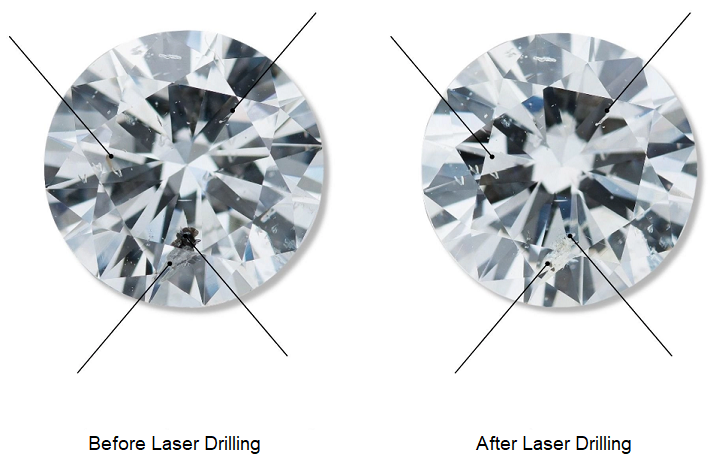 Laser drilling is a technique used to remove inclusions such as black spots or foreign crystals embedded within a diamond's crystalline structure.

During this process, a thin channel is drilled with a laser beam from the surface to the inclusion of the diamond. Through the channel acidic chemicals (typically hydrofluoric acid (HF) and sulphuric acid (H2So4)) are forced into the opening to dissolve and bleach out the inclusions.

After dissolving the inclusion, there is a space left in that place. The resulting hollow inside the diamond would be still considered a type of flaw, but it would not visible. As for the tunnel drilled in the diamond, it is usually extremely thin and practically invisible with the naked eye. It can be seen only with a microscope. Once a passageway has been opened up, then the diamond is deep boiled to remove the black from the inclusion.

This procedure will leave a small, but detectably processed "tunnel" inclusion from the surface to the inclusion that was black prior to the procedure (See Figure below).

This procedure is not sanctioned by the GIA and must legally be disclosed by anyone selling diamonds treated with laser drilling.

The clarity of diamonds after laser drilling can usually increase by up to one grade, sometimes even more. The downside of laser drilling is that it can weaken the diamond's structure. That is not a problem if there are just a few holes drilled, but if the diamond has a lot of inclusions removed this way, the resulting cavities and channels can make it easier to break.

It is important to understand that laser-drilled diamonds usually originate from low-quality diamonds that are not desirable and saleable. 99% of enhanced diamonds have poor cut quality because it does not make sense to pay attention to achieve ideal cut standards. 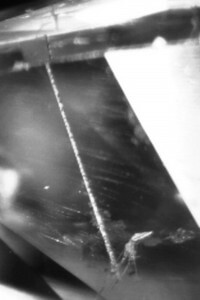 Despite the fact that the ensuing laser created inclusion is larger than the "tunnel" left behind by the regular laser drill, its appeal is two-fold.

Firstly, for the unscrupulous diamond dealers out there (and there are many), the mark left is much more natural looking and harder to detect. Secondly, the flat plane inclusion is more easily filled (see next item) than the "tunnel" created by a regular laser drill. 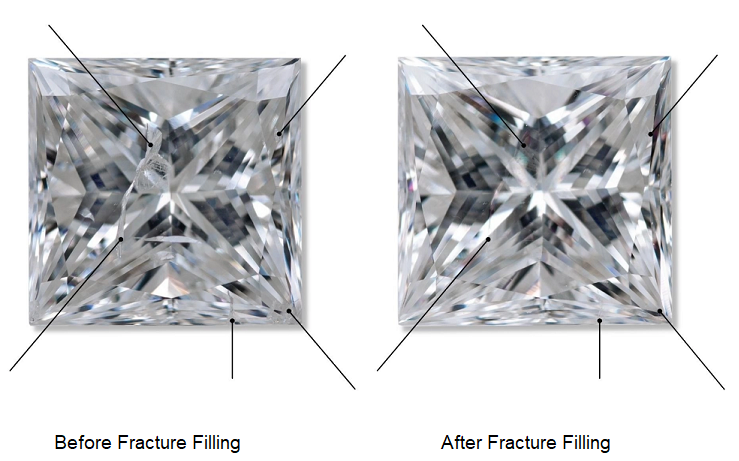 Fracture filling is another technique used to improve diamond clarity. As the name suggests, it hides fractures (feathers) in a diamond.

Although surface-reaching feathers can be removed through polishing, fracture filling is more favoured as it does not lead to significant carat weight loss. During this process, a transparent crystalline substance is injected into surface fractures (scratches and cracks) to make them less visible after the filler is solidified. You should realize that a fracture-filled diamond is no longer made of uniform material and the injected filler reflects light differently, which is why it can change the diamond's sparkle.

This procedure works best with clear "feather" type inclusions. These inclusions are generally clean empty cavities that when filled by the special solution become nearly invisible.

This procedure is often used in tandem with "Special Laser Drilling" to reach inclusions buried beneath the surface of the diamond.

Like laser drilling, fracture filling needs to be legally disclosed with any purchase. Furthermore, the GIA will not grade fracture filled diamonds.

It is important to mention that fracture filling is not permanent. The material used to fill the diamond can melt or crack if a jeweller uses heat to repair your jewellery piece. Besides, once a diamond is fracture-filled, it should not be put in an ultrasonic cleaner as it will damage the filling.

Because of the non-permanent nature of fracture-filled diamonds, most companies selling such diamonds offer lifetime repairs for their products. However, the second filling will never be as good as the first one because once a diamond is filled with a resin it is impossible to reverse the process.

Although clarity enhanced diamonds may seem appealing to many customers due to their low price, there is a reason for them being affordable. The main problem with such diamonds is that they were undesirable diamonds in low clarity grades presented as innovation and compared to properly graded diamonds.

The truth is that unethical jewellers try to provide you with the false impression that clarity enhanced diamonds are worth more than they are. For example, a natural SI2 clarity diamond can never be compared with an enhanced SI2 diamond that used to have I1 clarity before the treatment. An enhanced diamond can never be a better deal, even if it costs less than an untreated diamond with the same parameters.

Moreover, GIA does not issue grading reports for diamonds that have undergone non-permanent or unstable treatment process such as fracture filling. They will issue reports for laser-drilled diamonds because this process is permanent but will disclose the presence of the treatment on the report.